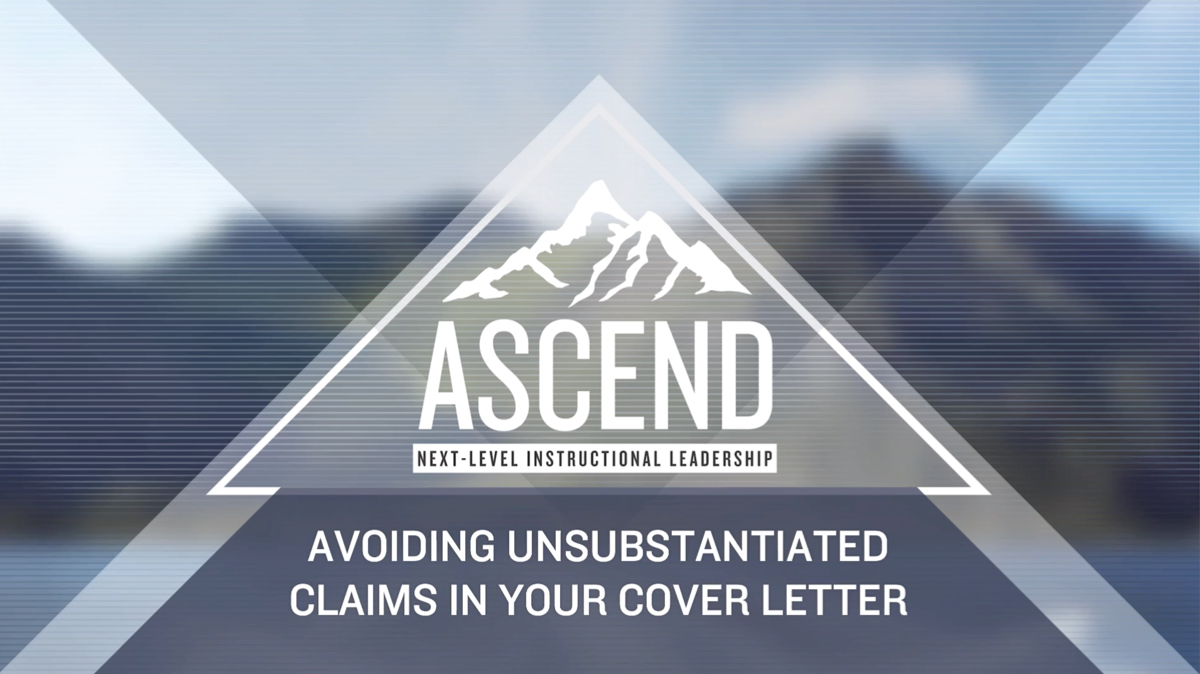 How can your cover letter make the strongest possible case that you deserve an interview?

Think of your cover letter as a persuasive 5-paragraph essay: your argument must be logically organized, and every claim you make must be backed by evidence.

One of the biggest opportunities for improvement may be removing poorly supported claims.

Many applicants make the mistake of pasting bullet points from their résumé into their cover letter, as a way of highlighting key characteristics they want to stand out. Not only does this waste space by repeating information that’s already in the résumé; it also weakens the argument by including unsubstantiated claims.

Regardless of their format, the worst offenders are typically lists—long sequences of claims unsupported by any evidence.

Consider a claim such as:

I am an ethical, collaborative leader who believes all students can learn, and I am skilled in using data to make decisions.

While this sounds like a perfectly nice thing to say about yourself, it’s loaded with claims—four of them—and it’s devoid of evidence.

Only one of these claims—the one about believing that all students can learn—can stand by itself. Beliefs are as incontrovertible as facts from your résumé, but they’re also not especially strong claims.

While your cover letter should include beliefs as well as facts from your résumé, they must all be used in support of strong claims.

The other claims—ethical, collaborative, and skilled in using data—weaken the overall argument if they aren’t backed by specific evidence.

It’s crucial to understand the difference in the rhetorical functions of the résumé and cover letter:

While bullet points can be a reader-friendly way to present sequences of related information, they must always provide supporting evidence, and must avoid wasting valuable space.

Bulleted Lists Waste Too Much Space

Perhaps the most important reason to avoid bulleted lists in your cover letter is a pragmatic one: they waste too much space.

For example, a list like this wastes more than 80% of each line of text, while providing no evidence:

I pride myself on being a leader who is:

Compare this space-wasting list with a tightly structured, well-supported argument:

I pride myself on being a student-focused leader who builds trust through strong professional relationships. When I began my tenure at Acme Middle School, one of my first priorities was to meet with student council representatives to learn what they saw as the school’s strengths and needs. I also met individually with each staff member to build a personal connection and gather input as I identified key priorities for my first months on the job.

In this example, each claim is backed by evidence:

Claim: I am a student-focused leader
Evidence: I met with student council right away

Claim: I build trust through strong professional relationships
Evidence: I met individually with each staff member

Keep this in mind as you organize your cover letter—while you’ll want to vary the structure of sentences and paragraphs to keep the reader engaged, be sure to avoid unsupported claims.

While there are many reasons to avoid bullets in your cover letter, sometimes they’re the right tool for the job.

Bullet points can be effective if you have several pieces of evidence for a single claim—especially if that claim is central to your argument that you’re a good fit for the role.

I have extensive experience in grant writing, fundraising, and program development. Over the past ten years at Acme Middle School, I:

It wouldn’t make sense to make separate claims for each of these examples, so bullets are an effective way to break up what would otherwise be a fairly large block of text:

I have extensive experience in grant writing, fundraising, and program development. I worked with our PTA and student gardening club at Acme Middle School to develop a proposal for a new greenhouse, then wrote a City Parks grant proposal that resulted in $50,000 in funding. I also wrote and received a $25,000 Communities In Schools grant to provide after-school childcare on campus. Additionally, I developed a new Classical Ensemble program in collaboration with Regional Arts Council, newly hired music teacher, and PTA, using $14,000 in grant funds to purchase new instruments, eliminating instrument rental fees for students.

In paragraph form, this supporting evidence becomes a bit of a drag to read—the sentence structure isn’t varied enough to be interesting.

Bullets make it easier for the reader to parse each piece of evidence, and see how it relates to the overall claim.